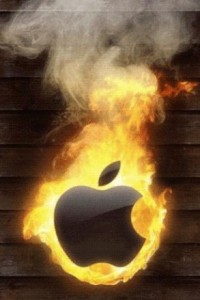 Apple is no longer the undisputed head of the K-12 class.

For the first time, Chromebook sales surpassed 51% in the K-12 market nationwide in the third quarter, according to a recent report by market researcher Futuresource Consulting. The surge reflects a fundamental shift in how American schools are buying tech in bulk and assessing students online, placing an emphasis on low-cost, easy-to-manage machines.

“It’s a tidal wave: Chrome is the clear U.S. market leader now,” says Mike Fisher, associate director of education technology at Futuresource. He says districts are drawn to the Chromebook’s Web-based operating system, ease of use, IT manageability and $200 to $300 price range.

And Chrome’s growth is accelerating, says Rajen Sheth, director of product management, Chrome and Android, for work and education, at Google. “We were at 1% to 2% (in 2012),” Sheth says. He was at the Consumer Electronics Showlast week, where OEMs were launching new Chromebooks, many of which will find their way into schools. “This has been trending for three years.”

Microsoft, through national contracts and Windows-based machines, remains on top for the K-12 market worldwide, with a 47% share. Chromebooks follows at 19% and Apple at 13%, Futuresource says.

Winning students at an early age is considered crucial for tech companies  in the approximately $15 billion K-12 market in the U.S.

Apple, through its dominance of the education market during the Steve Jobs years, helped establish its strong brand and shaped the computing habits of millions of young Americans.

The trend away from Apple products hasn’t gone unnoticed by the Cupertino, Calif., company now run by Tim Cook. Monday, it released education updates to its mobile operating system, version iOS 9.3 — namely, a simplified login and the ability to more easily share and manage iPads in schools securely — in hopes of wresting back market share. It also has shaved iPad prices.

Apple is still big in education. There are about 170,000 education apps on the App Store, and the company maintains a large installed base of iPads and MacBooks in schools. It has sold 15 million iPads into educational institutions worldwide. Apple CEO Tim Cook attends the inauguration of the academic year at the Bocconi University, in Milan, Italy, Tuesday, Nov.10, 2015. On a trip to Europe that coincided with the sales start for Apple’s iPad Pro, Cook questioned why anyone would buy a PC. (Photo: AP/Luca Bruno)

But its position has changed. While Apple’s dominance in K-12 has played an essential role in its success, “it no longer is a leader but a player” in the space, says Brian Blau, lead Apple analyst at market researcher Gartner.

The recent movement toward lower-priced, manageable devices reflects a sea change in the education market, Fisher says. “Districts need more volume (in technology equipment), and they need to deploy for the online assessment of students,” he says. “Chromebooks offer the answer for now.”

At many school districts nationwide, computer use increasingly is being segmented between iPads and tablets for younger students and Chromebooks and notebooks for middle grades and up, Fisher says.

Its inexpensive price tag and free apps made Chromebooks an easy choice for Matt Smith, director of technology at Central School District 301 in Burlington, Ill., where 3,800 K-12 students primarily use Chromebook. “Cost and benefit makes it the best product,” says Smith, who wanted each student to have access to a computing device.

At Aurora City Schools in Ohio, most of the 3,000 K-12 students use Chromebooks, school superintendent Pat Ciccantelli says.

“It is a powerful tool for $150 that opens up the world to kids,” says Dayna Steele, CEO of yourdailysuccesstip.com, an advice website. Over the past two years, she has donated 135 Chromebooks to schools in Houston, Atlanta and Miami.

Chromebooks may soon find more competition in the low-price range.

Microsoft is partnering with software firm Lightspeedto better manage a range of devices at schools, and it is helping bring to market new devices that are likely to compete head-on with Google in the sub-$300 range.

“We recognize that schools have different uses, at a variety of price points, for the learning of subjects,” says Anthony Salcito, vice president of worldwide education for Microsoft.

Carl Hooker, director of innovation and digital learning at Eanes Independent School District in Austin, where 8,000 K-12 students are enrolled, says he’s likely to stick with iPads after four years and the district is considering options other than Chromebooks. “We looked at Chromebooks but felt it was limited in innovation and creativity,” he says.

Apple can still rely on its education bona fides, but given its rivals’ growth, likely not for long.